Starting January 11th, 2021, #5 plastic tubs will be accepted in Rumpke’s recycling program. Residents can now place plastic tubs, along with their lids in the recycling bin.  Be sure to rinse the container and reattach the lid before tossing in the bin.

What to do with Household Hazardous Waste

Cleaning out your garage?  Gather an inventory of chemicals you no longer need with approximate weights or volumes of each category of waste and call the Solid Waste District for a voucher at 732-7745.  The voucher will pay for disposal at Environmental Enterprises and can be mailed or e-mailed to you.

Remember, paint can simply be dried out by adding kitty litter, newspaper clippings or drying material sold at hardware stores.  Once it’s a pasty consistency, it can be set on the curb for your waste hauler to collect. Good news! The annual Spring Litter Cleanup has been rescheduled for July 4th through 25th. Go to www.springlittercleanup.com for more information!

No Bags in Recycling Bins Plastic bags do not go in curbside or drop-off recycling bins! Trash bags and shopping bags cannot be recycled at the facilities we send our recyclables to. When bags go to our recycling facilities, they can tangle on the sorting equipment and cause it to break down. Remove your recyclables from bags when you put them in the bin.

Although plastic shopping bags cannot be recycled through our curbside or drop-off recycling programs, recycling your bags is still possible through special programs. Try bringing your shopping bags to a grocery or department store for recycling. Many stores have plastic bag recycling bins just inside their entryways. Make sure your bags are clean and dry before dropping them off at a store recycling program. 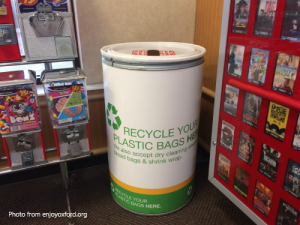 When the holidays are over, make sure you treecycle your live Christmas tree.

Treecycling is the act of recycling your cut Christmas tree, so that it can be used in other capacities. The trees can get a second life after they are chipped (used for mulch and hiking trails), become fish or wildlife habitat, or are utilized for lake and river shoreline stabilization.

Many communities and the Clermont County Park District are offering opportunities for you to treecycle. But before you take your tree to a collection site or haul it to the curb for pick-up, please be sure to remove all lights, tinsel and decorations.

Pattison Park Lakeside will be closed starting September 2nd for construction. At that time, work will begin on the sidewalks to be installed along the length of the parking lot. This will entail the removal of several feet asphalt along the edge of the parking lot creating a lack of parking and a fall hazard.

This part of the construction should last through the end of September depending upon weather and construction progress.

Thanks for your cooperation and understanding!

Wear clothes that can get dirty and closed-toe shoes. Organizers will provide trash bags and a limited number of gloves. Each volunteer will receive a free T-shirt.

“Rivers and streams provide 65 percent of our nation’s drinking water and 88 percent of Cincinnati’s drinking water,” said Penny Greenler, Clermont Country River Sweep coordinator. “By participating in the River Sweep cleanup effort with others in your community, you can help make your Ohio River a safer, healthier place for wildlife and people.”

BATAVIA, Ohio – Paul Braasch, a champion for the environment in Clermont County and throughout Ohio, is retiring after 25 years at Clermont County, as Director of the Adams-Clermont Solid Waste District and the county’s Braasch has had an enormous impact on Clermont County as an advocate for recycling, water quality, and environmental stewardship. His success, he says, lies in his ability to bring people to the table and work together.

Braasch, who graduated with a Bachelor of Science in agriculture from the University of Kentucky, developed expertise in recycling when he worked in the 1980s at Adams Brown Recycling in Georgetown, now the largest non-profit recycler in the State of Ohio. Later, as an employee with SCS Engineers, an environmental consulting firm, they wrote solid waste plans for 19 counties throughout Ohio as the Ohio Legislature required. “I wrote the Adams-Clermont Solid Waste Plan and then I was recruited to come to Clermont County,” he said. He began his career at the county in 1993.

Braasch’s interest in the environment stemmed naturally from his interest in agriculture, he said. He paraphrases a John Muir quote, which emphasizes the connectivity of the environment: “When one tugs at a single string in nature, he finds it attached to the rest of the world.”  “It’s all connected,” Braasch said. “I’ve found it very fulfilling to be involved in making things better, and do what little I could to conserve our resources.  I was brought up by a Dutch German family where conservation of every penny was demanded!”

Braasch is proud of the “unprecedented” level of research done on water quality in the East Fork watershed, under the auspices of the East Fork Watershed Cooperative. Clermont County took over the operation of a Procter & Gamble stream research facility in Miami Township, on the banks of the East Fork of the Little Miami River, and now leases it to the U.S. Environmental Protection Agency. The EPA conducts research of the watershed from this facility.

What was originally called the Scientific Advisory Committee has now evolved into a group involving the U.S. EPA, Ohio EPA, USGS, the Army Corps of Engineers, NOAA, several universities, as well as the Clermont County stakeholders such as the Soil & Water Conservation District. “The level of science that’s been brought to the East Fork Little Miami watershed is unprecedented in the United States,” Braasch said. “It’s a little known fact as to how much research, how much expertise has been directed to the East Fork watershed. We were way ahead of our time when we started looking at water quality on a watershed basis and now we’re probably way ahead of most of the country in understanding what drives water quality. We’re learning what we need to do to reduce nutrients and pollutants to our streams.”

Best management practices that farmers are adopting include the use of cover crops and building wetlands on farm property to soak up nutrients. Braasch is convinced that over time, these practices will become widespread and that harmful algal blooms, which have plagued Harsha Lake, as well as the Ohio River, will become less pervasive.

One underappreciated factor in the quality of water in the United States, Braasch said, is something most of us take for granted now: centralized sewer systems. “It used to be people had a pipe to the creek … or maybe a leachfield which evolved to an on-site system. It used to be that the Ohio River was the sewer system,” he said. “Having centralized sewers has been tremendous in improving water quality and our health. These guys who work for the Water Resources Department, putting in sewer pipes and maintaining them … It’s a dirty hard job and they don’t get enough appreciation.”

He’s also proud of the level of recycling that is now done throughout the county. He brought drop-off recycling to the county years ago, but now curbside recycling is gaining popularity. Just in the last year, the Solid Waste District helped Batavia, Ohio and Williamsburg townships secure curbside recycling via waste franchising to over 8,000 households.  “More people are recycling because they know it’s the right thing to do,” he said. “Are we running out of space for landfills? No, it’s a big country. There’s plenty of places we could throw garbage. But it’s such a waste of our money and resources to throw it in there when we can reuse it. And it creates jobs. It doesn’t have to go into a hole in the ground to make a mound that we can’t ever use again.”

Braasch says Clermont County must continue to be vigilant in monitoring the CECOS International hazardous waste facility in Jackson Township, which stopped receiving waste in 1988 and closed in 1997. Clermont County monitors the site, along with the U.S. EPA and Ohio EPA. The hazardous waste site is upstream of Harsha Lake, which supplies some of the county’s water. Braasch was instrumental in negotiating an agreement between CECOS and the county, approved in 2012, that added groundwater monitoring wells at the site.

As he retires, Braasch looks forward, of course, to getting out more in nature – skiing, backpacking and more traveling. Several trips out West are on the itinerary, as well as some skiing in Banff, in the Canadian Rockies.  He loves skiing. “When you’re skiing, you don’t think about anything else but what you’re doing.  If you don’t, you’re gonna get hurt.  And so you’re focused and you forget about everything else around you. It’s soothing and relaxing.”

Hannah Lubbers, who has worked with Braasch for 10 years at the Solid Waste District and OEQ, will become director of both on Feb. 1.

Please don’t place batteries in your trash or recycling containers. Typically, rechargeable batteries can be recycled at Home Depot, Lowes, Office Depot and Staples stores. To find the location closest to you, visit www.call2recycle.org/locator/.